When a reporter calls Rick Davis’s cell phone to arrange an interview about his experiences with enteral feeding, a cheerful, if slightly static-tinged voice answers, “Hello, this is Rick.” Asked if he can spare some time to talk, he explains that there’s a problem. The “problem” is that Rick, a human dynamo who’s training for a 25-kilometer fundraising walk, is on a hike at the moment – about 3,000 feet up a big Utah mountain. He can’t talk now, but he does have some time tomorrow. Seven a.m. sound alright?

This Enteral Feeder’s Story Is Food for Thought

Rick’s soaring spirit and no-is-not-an-option attitude have served him well throughout his life, but never so much as after he suffered a stroke in December 2000.

Within weeks, Rick, then 57 years old and president and CEO of Salt Lake’s Convention and Visitors Bureau, had put himself on a fast track to recovery. In record time, he abandoned the walker that had accompanied him home from rehab and, despite considerable fatigue, was able to walk greater distances unassisted. Similarly, he had regained his speech with the help of speech therapists. But eating and drinking were proving to be a bit of a challenge. Rick’s inability to swallow had necessitated use of a feeding tube, which he assumed was temporary.

As a result of the stroke, the muscles controlling Rick’s esophagus had been paralyzed. Now as focused on swallowing, as he had been on walking and talking, Rick plunged into the search for a solution. He visited a small army of doctors and specialists, including one of the nation’s leading swallowing therapists who prescribed exercises, which Rick did faithfully up to 12 times a day for six months. Other treatments attempted were Botox injections into the throat muscles and dilation of the sphincter at the top of the esophagus. Ultimately, Rick was told that  along with the sphincter, all the muscles of the esophagus that permit swallowing were paralyzed.

Along the way, a caring and informed dietitian told Rick about the Oley Foundation, a nonprofit advocacy group for the enteral feeding community. Rick signed on for his first Oley conference, where he met people like him and some who wanted to be more like him. He also stopped by a Halyard display booth and discovered the MIC-KEY* Low-Profile Gastrostomy Feeding Tube.

Recalls Rick, “I came home and said, ‘Wow, I want one of those!’ But my GI doctor had never heard of the MIC-KEY (tube). I had the brochure and saw that it was made in Utah, so I went o 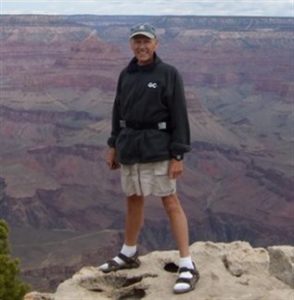 ver to the factory, bought one and brought it to my doctor and  told him to put it in.”

“The MIC-KEY (tube) was huge in terms of improving the quality of my life. It has a low-profile, is easy to insert (he does it himself), and doesn’t get caught in my shirts or the bed sheets. It’s
about freedom and mobility.” It also meant an end to the constant stoma irritation he had been experiencing. Simply put, it was a breakthrough, especially combined with Rick’s discovery of portable equipment, which permitted him to feed on the road and travel more easily-allowing him to return to the lifestyle he once knew and loved. 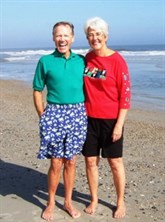 Ten years later, Rick retired in Florida, but he has not slowed down. In addition to surfing and body boarding, he has hiked across the Grand Canyon nine times since his stroke.

Having lunch on a hike

Rick is the first enteral tube feeder to be nominated and serve as president of the Oley Foundation. He’s also a board member of the National Ability Center, the American Stroke Association and is president of his local men’s club. He takes his role as an ambassador for enteral feeding patients seriously, speaking at various events as well as mentoring and counseling other feeding tube patients.

Indications For Use
The MIC-KEY* Low-Profile & MIC* Feeding Tubes are indicated for use in patients who require enteral feeding, are unable to tolerate oral feeding, require gastric decompression and/or medication delivery directly into either the stomach, distal to the stomach, distal duodenum or proximal jejunum (tube types vary from G, J, TJ/ GJ & GE depending on what your medical professional has prescribed/placed).

Contraindications
Contraindications for placement of a feeding tube include, but are not limited to ascites, colonic interposition, portal hypertension, peritonitis and morbid obesity.

If you have any questions about your tube, consult your medical professional or call Avanos Customer Service at 1-844-4Avanos (1-844-428-2667) in the United States.

Any cookies that may not be particularly necessary for the website to function and is used specifically to collect user personal data via analytics, ads, other embedded contents are termed as non-necessary cookies. It is mandatory to procure user consent prior to running these cookies on your website.